I use remote sensing and geophysics to study the flow of ice masses from the interior of ice sheets out the ocean: what controls the speed and stability of ice streams? How does englacial and subglacial hydrology contribute to ice flow dynamics?

​Below are a selection of my recent projects. 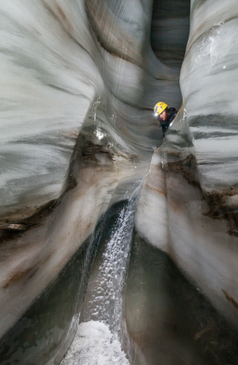 Winter time mapping of englacial channels in Svalbard shows that knickpoint migration dominates channel evolution. We present results from two years of glacial-speleological mapping efforts in englacial and subglacial channels on Larsbreen Glacier, Svalbard. Flat channels formed through cut-and-closure are interrupted by clustered knickpoints ranging in height from 1-10m, which constitute ~66% of the overall elevation drop along the channel length. From former knickpoint scars we derive relative horizontal/vertical erosion rates, and find that horizontal migration of knickpoints is a dominant incision mechanism by which water cuts to the bed of the glacier. Englacial channels reach the bed at a final knickpoint, giving subglacial streams particularly large bed erosive capacity. From observations, we conjecture that steep slopes are unstable and rapidly form knickpoints, creating the observed pattern of flat slopes punctuated by knickpoint clusters.
We test these hypotheses by modeling knickpoint growth and migration using 3ST1D, a 1- D finite difference model of open streamflow, capable of handling transcritical flow, coupled to our own derivation of ice melt and erosion. Modeled erosion rates are comparable to observations of about 0.6m/yr, and increase with larger slopes. This drives a thermal instability of steep slopes, promoting knickpoint formation. We find that small perturbations in flow rapidly diffuse, but larger steps can persist and migrate. We suggest that knickpoints form through two processes: differential channel incision between debris-laden and adjacent clean ice, as well as erosion rate variations with water flow over sufficiently large bumps. This work demonstrates the importance of incorporating knickpoint processes into glacial hydrologic modeling.

We present firn density data from a 40-km-long transect across the NE Greenland Ice Stream (NEGIS) and find ~30m variations in firn thickness that are coincident with the ice stream shear margins. May different kinds of glaciological work require a robust models of firn, the transitional material between snow and ice, but current firn densification models fail to predict variations seen across NEGIS.
We find that thinner firn layers are present within the ice stream margins, with a thicker, more uniform firn layer preset elsewhere in our study region. Shallow radar flown across the ice stream shows no variation in accumulation rates within the flow margins, and surface temperature variations driving changes in firn at the tens-of-kilometers scale are likely minimal. A GPS strain grid maintained for three weeks across both margins observed strong side shearing, with rapid stretching and then compression along particle paths, indicating large deviatoric stresses in the margins. As such, we interpret these large firn thickness variations as indicators of firn densification dependent on the effective stress state as well as the overburden pressure. This suggests that strain rate increases nonlinearly with stress across the shear margins, and emphasizes the importance of considering stress state in future firn densification model development. 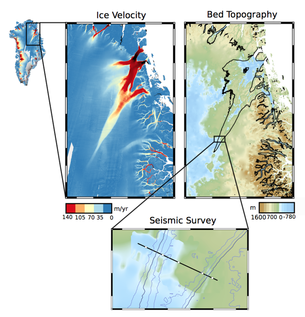 We present the seismic results of the first ground-based geophysical survey of the NE Greenland Ice Stream in order to describe the basal conditions that promote rapid flow and maintain a stable flow field on this unusual ice stream. North East Greenland Ice Stream (NEGIS) is the largest ice stream on Greenland, draining ~15% of the ice-sheet area. Because of the unique potential for this ice stream to influence inland ice dynamics through its large catchment area, it is important to include the flow dynamics of NEGIS in future mass-balance studies of Greenland.
Reflection seismic amplitude-verses-offset data indicate the presence of sediments both within and outside of regions of fast flow, with higher water content promoting lubrication within the ice stream (Christianson et al., 2014). We use near-offset shots to characterize the polarity of bed reflectors, indicating water content. Variations in water content across the ice stream are consistent with previously reported amplitude-vs-offset seismic surveying in the region, but provide a higher resolution view of subglacial conditions. These results support the hypothesis of ‘sticky’ high-basal- resistance regions under the ice stream margins, which restrict ice stream widening and promote stability.

Alaska currently contributes more to global sea level rise (SLR) than any mountain glacier system in the world, and recent estimates show negative mass balances and glacier retreat, regionally.  However, Taku Glacier within the southern Juneau Icefield has exhibited a positive mass balance and terminus advance over the past century, despite the overall regional negative balance trend.  Over the past two years the Taku terminus has not advanced; we therefore hypothesize that Taku Glacier is no longer in steady state with the warming Southeast Alaska climate and that it will begin retreat within the near future.  The unique glacier mass balance of Taku Glacier, ease of access, and available long term instrumental records from the Southern Juneau Icefield make it a prime laboratory to study the tidewater glacier system and its evolution over time. Our approach includes: 1) collection of high-resolution and geo-referenced 2-5 MHz and 400-900 MHz ground-penetrating radar (GPR) to map ice depth and winter accumulation, respectively; 2) collection of active seismic survey profiles (2D and 3D) to estimate basin sub-surface geological structure; 3) incorporation of field geophysical data (e.g. GPR, seismic, ice flow velocities, digital elevations, geological, and JIRP climate and mass balance datasets) into numerical models to simulate glacier response from the prior instrumental record into to future projected scenarios during this century.